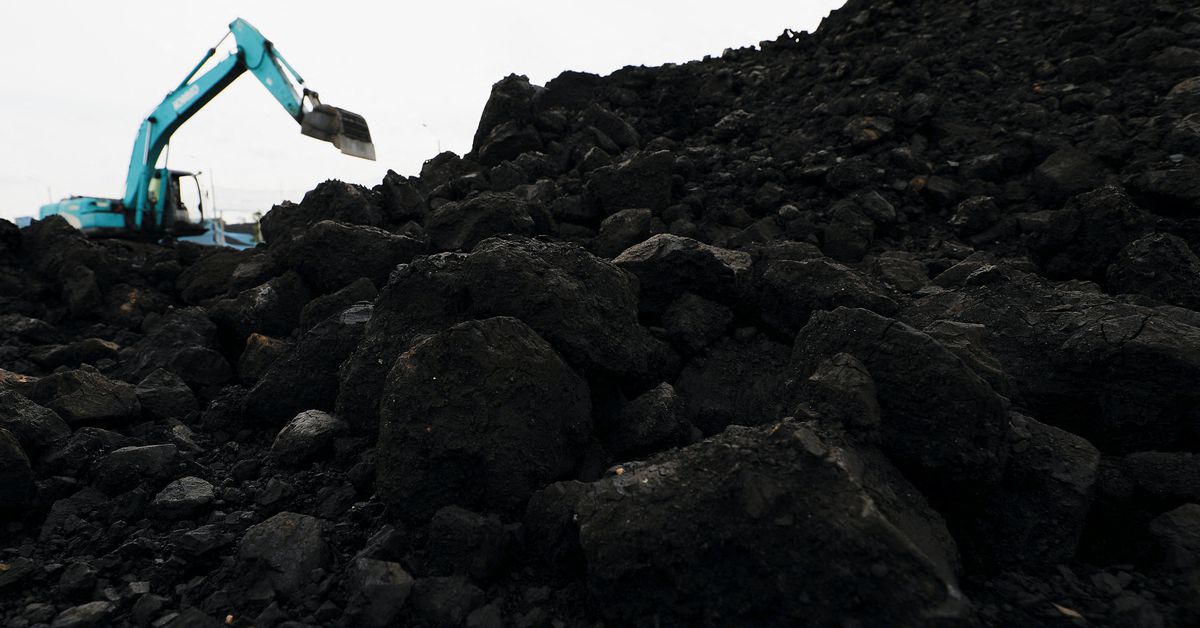 Coal is seen as a heavy machinery unloads it from the barges into a truck to be distributed, at the Karya Citra Nusantara port in North Jakarta, Indonesia, January 13, 2022. REUTERS/Willy Kurniawan

LAUNCESTON, Australia, Jan 24 (Reuters) – Indonesia’s short-lived ban on exporting coal has sent ructions through the seaborne market for the fuel in Asia, with the fallout likely to last beyond the initial shortage of available cargoes.

The short-term impact of the sudden ban announced on Jan. 1 by the world’s largest exporter of the polluting fuel was to send prices for cargoes from other major shippers soaring back toward last year’s record highs.

The longer-term impact is that the key planks of being cheap and reliable, promoted by the coal industry in its battle for survival against cleaner energy alternatives, are seriously undermined.

Indonesia’s government imposed a month-long ban on Jan. 1 on coal exports in a bid to ensure sufficient domestic supplies, but by Jan. 20 restrictions were being eased with 139 companies allowed to ship the fuel overseas.

However, it’s likely that the seaborne market will be short of several million tonnes in January and February as it will take time for Indonesia’s shipments to return to more normal levels.

The supply crunch is being exacerbated by the inability of some major exporters, such as Russia and South Africa, to boost their shipments, with only Australia likely to ship more coal in January than it did in December.

Indonesia is on track to export 17.7 million tonnes of coal in January, according to vessel-tracking and port data compiled by commodity consultants Kpler.

This will be some 43% below December’s 31.29 million tonnes and the weakest month since Kpler starting compiling data in January 2017.

Australia’s exports of all grades of coal are expected by Kpler to be around 31.29 million tonnes in January, up from December’s 29.74 million and the highest since September last year.

But much of the gain in Australia’s exports in January is likely to be for coking coal used to make steel, rather than thermal coal for power plants.

Australia’s thermal coal shipments are likely to be around 17.22 million tonnes in January, up just 380,000 tonnes from December’s 16.84 million, according to Kpler.

The shipping data makes it clear that coal supply issues extend beyond Indonesia and the other major exporters, Australia excepted, have been unable to take advantage of the shortage created by Jakarta’s ban.

With coal in short supply it’s not surprising that prices have rallied, with the benchmark Australian thermal coal price, the Newcastle Port Weekly Index , as assessed by commodity price reporting agency Argus, surging to $243.97 a tonne in the week to Jan. 21.

There have been reports of a Newcastle cargo changing hands at more than $300 a tonne, which if confirmed would show the desperation of some buyers to secure coal.

Russian coal prices at the eastern port of Vostochny have also surged, with IHS McCloskey assessing cargoes at $233 a tonne last week, up from recent lows around $155 in mid-November.

These prices are likely to moderate as Indonesian cargoes return to the market and also as the peak northern winter demand period winds down.

But high coal prices and the threat of resource nationalism, as shown by Indonesia’s sudden export ban, point to a more worrying longer term future for seaborne coal in Asia.

Price sensitive buyers such as India and the Philippines will be forced to look at alternatives to importing coal, either from producing more domestically or switching to alternatives such as renewable energy plus storage or natural gas.

Traditional buyers such as Japan and South Korea may be better placed to afford high prices, but they too will be looking at alternatives given their long-term commitments to net-zero carbon emissions.