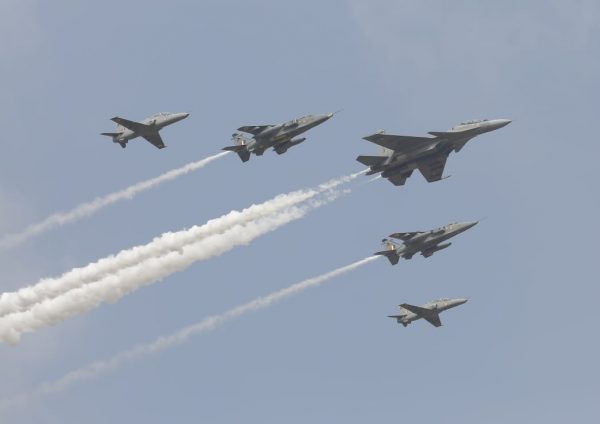 India’s defense export strategy is strongly rooted in the geopolitics of the Indo-Pacific region. The recently held Aero India 2021 airshow in Bengaluru in the southern state of Karnataka shows that India is priming for strong defense cooperation with Indian Ocean Region (IOR) countries in the face of growing Chinese influence in the region.

The major highlight of the Aero India show was the Indian Ocean Region (IOR) Defense Minister’s Conclave 2021 organized by the Indian MoD to promote defense cooperation among the participating countries. The defense minister’s conclave clearly displayed India’s determination to build close cooperation and engagement among the countries in the IOR.

IOR countries have to balance or counter the new situations they face on account of China’s rise, its economic power and aggressive military posturing. This posturing has led to a feeling of political discomfort among many countries in the region, prompting them to seek alternate avenues of cooperation and collaboration with other major regional and external powers. The rise of China as a dominant player in the Indo-Pacific region poses new security challenges in this region. Data from the Stockholm International Peace Research Institute (SIPRI) shows that the Philippines, Vietnam, Indonesia, Singapore, and Taiwan have all increased their arms imports in recent years.

Get briefed on the story of the week, and developing stories to watch across the Asia-Pacific.

Meanwhile, China, which has already found a place in the global defense market, is partnering with Pakistan to sell the jointly developed export variant JF-17 fighter aircraft in Asia. This will eventually bring Pakistan, which otherwise has no expertise in exporting defense technology, into the arms market. The China-Pakistan nexus is a serious concern for India and it would seriously jeopardize India’s position as a regional power.

India has made rapid strides in defense technology in recent years and is well placed to take up initiatives for exporting defense equipment in the region. The Defense Research and Development Organization (DRDO) along with various Public Sector Undertakings (PSUs) and the private sector have developed various products for the Indian armed forces. It has also developed expertise in the arena of integrating equipment from diverse sources with different industry standards. This has allowed Indian PSUs to develop their own set of sensors, navigation kits for fighter aircraft, and upgraded electronic warfare suite for platforms of diverse origin, besides being able to offer standard spares and maintenance service for the same. Most of the systems developed by DRDO have already found a place in various operations of the Indian armed forces. This proves that DRDO-developed systems are already benchmarked with international standards and therefore can be exported.

There is huge demand in the international market for different types of weapon systems. Indian exports in the recent past include HMS-X2 sonars to Myanmar, Cheetal helicopters to Afghanistan, Dhruv Helicopters and bulletproof jackets to Nepal, Sukhoi 30 avionics and MIG spare parts to Malaysia, offshore patrol vessels to Mauritius, and spare parts for Jaguar aircraft to Oman. The most recent big ticket sale was a contract for supplying SWATHI Weapon Locating Radar to Armenia. In October 2020, India also gifted the diesel-electric submarine INS Sindhuvir – renamed UMS Minye Theinkhathu – as part of its strategic outreach to Myanmar. This deal was a significant because it boosted the capabilities of a country right next to India in the IOR. At the same time, India’s submarine is far superior to what China offered to Myanmar.

India constitutes less than 1 percent of the world’s total arms exports. As per the latest estimates, India’s defense exports of equipment and other systems rose to 107.5 billion rupees (roughly $1.5 billion) in 2018-2019, compared to 15.2 billion rupees in 2016-2017. Meanwhile the Indian government is looking at a target of reaching $3-5 billion in exports in the next two years. The MoD’s Department of Defense Production (DDP) is steering a Defense Export Promotion abroad and has announced various policy measure to streamline export promotion.

Still, in comparison with other Tier-II arms exporting countries (China, Brazil, Turkey, and South Korea) which have established a significant presence in global defense markets, India is still lagging behind. China, which was until recently one of the largest importers of defense equipment, has become more self-reliant for its military needs and now delivers arms to 44 countries, mostly in Asia and Africa. Likewise, South Korea, Turkey, Israel, and Brazil which largely relied on Western powers for technology in the past, have been able to penetrate and capture defense markets across the world. Although India has made significant advancements in defense technology using Russian and Western technology it has not utilized defense exports to its fullest potential.

Prominent economist Dr. Vijay Kelkar’s testimony to the standing committee on defense 2008-2009 has interesting implications for how to promote India’s defense exports. At the time, Kelkar said that it is “important not only in terms of industry but also it has a political and strategic dimension that the country should become an exporter of defense technology.” In the wake of growing insecurity in the Indian Ocean region, regional countries view India as a strong contender to counter China’s expansionist policy. Defense exports can become one aspect of India’s foreign policy where New Delhi can make substantial gains in bilateral relationships.

Prakash Panneerselvam is an assistant professor at the National Institute of Advanced Studies (NIAS), Bengaluru.